The Crew of Ordinary Day

June Alane Reif (Director) fell in love with the stage as a toddler and studied theater as a young adult at Louisiana State University where she made her directorial debut with an adaptation of Kay Boyle’s The Astronomer’s Wife. Once bitten by the directing bug, she has certainly not been shy—directing shows in playhouses from Baton Rouge, LA to Napa, CA. Some of her most memorable directorial achievements include Biloxi Blues, On Golden Pond, Laura, Seascape and God of Carnage. June is a veteran actor, director and board member of Valley Players. She is delighted to have had the honor to direct the world premiere of Lorraine’s powerful play and to have had the opportunity to work with this very fine cast and crew. 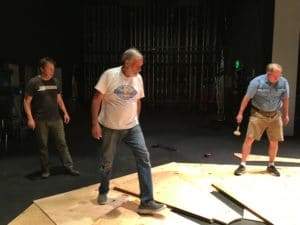 Alan Schneider (Co-Stage Manager) has spent the last 2 years involved in small theater productions in the valley, occasionally as an actor; mostly as a stage manager. In his “spare time” he’s an adjunct professor of English and Literature. This is his first production in a full-sized theater and he wishes to extend his gratitude to all the cast, the crew, and to June for a wonderful opportunity and a better experience.

Paul Marciniak (Co-Stage Manager) is a retired Calibration Engineer who is now spending time traveling and time at their mountain cabin with his wife, Marjean. Paul was a founding member of the Dreamweavers Troupe and was in many of their earlier productions. He is glad to be back in theater with Valley Players and enjoys volunteering backstage for this very talented group.

Rhonda Bowen (Set Designer) returned to acting this year after a long hiatus in Valley Players’ production of The Old Friends. Now she’s delighted to exercise her talents as Set Designer for Ordinary Day. Born and raised in Marin County, Rhonda is a third generation San Francisco Bay Area native. She studied Theatre Arts at Santa Rosa Junior College, appearing in numerous productions throughout Sonoma County for years before following a different path. A few favorite past roles include Sonia in They’re Playing Our Song, Myra Arundel in Hay Fever, Fraulein Kost in Cabaret and Lampito in Lysistrata. Rhonda received her B.A. in Architecture from University of California at Berkeley and continues to practice in that field. She enjoys traveling, art, singing jazz, and has called the Napa Valley home since 1991. 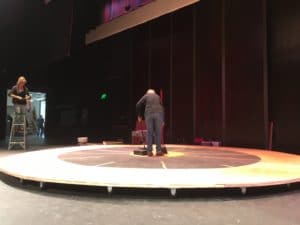 Lu Kenmonth (Lighting Design and Technician) is a 2nd grade teacher at an Arts integration school in Napa. Lu has produced and directed five children’s musical theater productions including Disney’s Aladdin, The Jungle Book and Annie. She was actively involved for years at Dreamweavers’ community theater in Napa, and currently is a board member for Valley Players.

Nick Kenmonth (Sound Design and Technician) has done the sound design for several Valley Players productions, Break a leg everyone!