The Cast of Ordinary Day 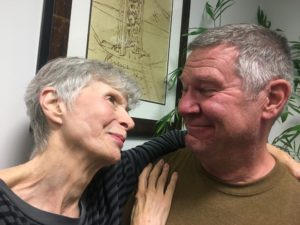 Zachary Stockton (Henry) holds a BA in theater from the University of California at Davis. He has been a Workhorse of the Napa theater scene for almost 50 years. Most recently he has appeared in Sister Act, The Odd Couple, Comedy of Errors, Annie Get Your Gun and God of Carnage. When he’s not on stage, he is either getting paid to talk and drink or riding a motorcycle.

Karen Stern (Maggie) is making her first appearance with Valley Players; she had previously worked with director June Alane Reif at Dreamweavers Theatre in The Gin Game. She has performed in Bay Area theatres from the Marin Shakespeare Theatre (A Midsummer Night’s Dream [Helena] and Two Gentlemen of Verona [Julia]) to Palo Alto Players (Same Time Next Year). She co-founded and acted in Word Play, a troupe which performed for civic and private groups primarily on the Peninsula. She was a member of SAG and Aftra, appearing in corporate training films and commercials.

Debbie Baumann (Josie) has appeared in several plays in the valley over the years and most recently as Sibyl Borden in The Old Friends. Her favorite role was Kate in Sylvia, directed by Carla Stanley. She brings to light this role of Josie on a more personal note as she can feel this role from her heart. Although her portrayal of a daughter of a Dad with Alzheimer’s is close to her heart, the emotions and actions in this play are opposite of how she handled this experience in her real life. Patience and understanding are crucial. Her heart goes out to her Mom for what she went through as a caretaker and to all of the families dealing with this dreadful disease. Thanks always to her husband and her most precious daughter for all their support. 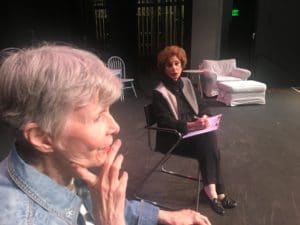 Patte Quinn (Doreen) was pleased when the Valley Players board unanimously chose to produce Ordinary Day. Not having been affected in any way by the disease, this play reveals some of the pain and frustration the patient, family and friends experience from Alzheimer’s. Patte’s heart and prayers are with those who face this difficult challenge.

Barbara Nemko (Dr. Goldsmith) As much as she loves her day job as Napa County Superintendent of Schools, Barbara equally loves being involved in community theatre. On stage, she’s played roles as diverse as the Swedish psychic in Deathtrap to the busty (false bra) Italian femme fatale in Lend Me a Tenor to the Jewish neighbor in Lucky Penny’s production of Funny Girl. Behind stage, she’s a member of the Lincoln Theatre board. She’s grateful for being part of this important production about the hazards of aging, and really appreciates the wonderful cast and director June Alane Reif.