The Crew of Vanya and Sonia and Masha and Spike 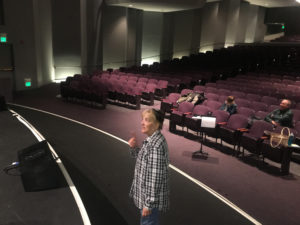 Lu Kenmonth (Co-Director, Lights and Sound Technician) is an elementary school teacher who has produced and directed four children’s musical theater productions including Disney’s Aladdin and Annie. She was actively involved for 13 years at Dreamweaver’s community theater in Napa. As a board member for Valley Players, Lu is excited to be a part of this talented cast and crew, and is especially delighted at having the chance to work side by side with her co-director Carla Spindt.

Paul Marciniak (Stage Manager) is a retired Calibration Engineer who is now spending time traveling and time at their mountain cabin with his wife, Marjean.  Paul was a founding member of the Dreamweavers Troupe and was in many of their earlier productions.  After a long hiatus from the stage he is glad to be back in theater with Valley Players and enjoys volunteering backstage for this very talented group.

Sandra Lovelace (Costume Mistress/Set Dresser) is delighted to be working with Valley Players again after last year’s performance as Kate in Anton in Show Business. In Aspen, Colorado, she studied with the Los Angeles Film Actors Guild, served as properties mistress and also had her own TV show “The Snowmass Sportsman”, which she wrote and directed. Here in California, she has served as stage manager and set dresser for Dreamweavers Theatre. Sandra hopes you enjoy the show!